In CryptoZombies Season 2, you will learn to build your own mod/fork of our mobile card game Zombie Battleground — and immediately deploy it to an audience of thousands of players 🤯 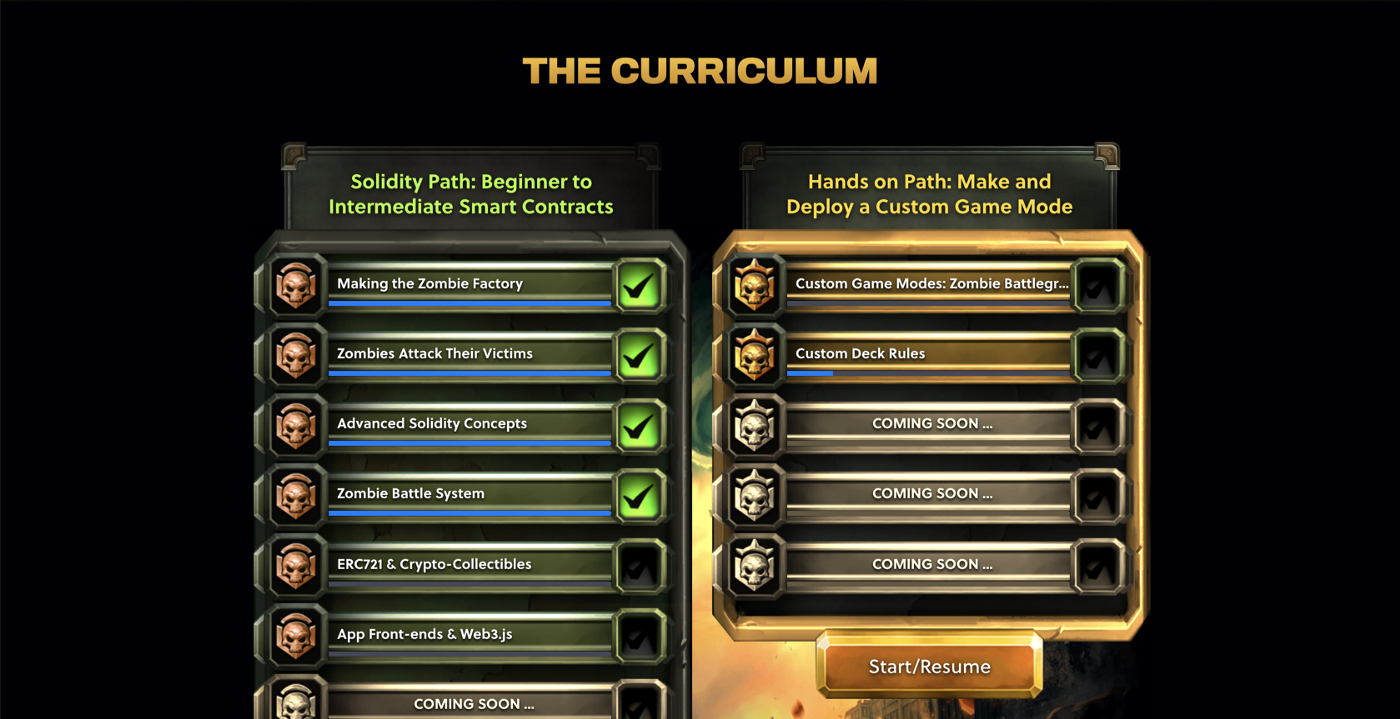 (And with a pretty major surprise announcement as well…)

Let’s take a look at what’s inside.

For the uninitiated, CryptoZombies.io is an interactive code school that teaches you to write smart contracts in Solidity through building your own crypto-collectibles game. It’s the most popular Ethereum programming tutorial to date, with over 300,000 students and counting.

The first thing you’ll notice is that CryptoZombies has gotten a new coat of paint — making it look approximately 347% more badass than before.

We’ve totally reorganized the site in order to separate the content into multiple course tracks, which you can pick and choose based on what you want to learn.

First of all, you’ll still have access to the original CryptoZombies course content (which has been updated with some improvements to make sure the content is teaching the latest and greatest best practices, as well as now allowing all lessons and chapters to be skipped, so students can go at their own pace). 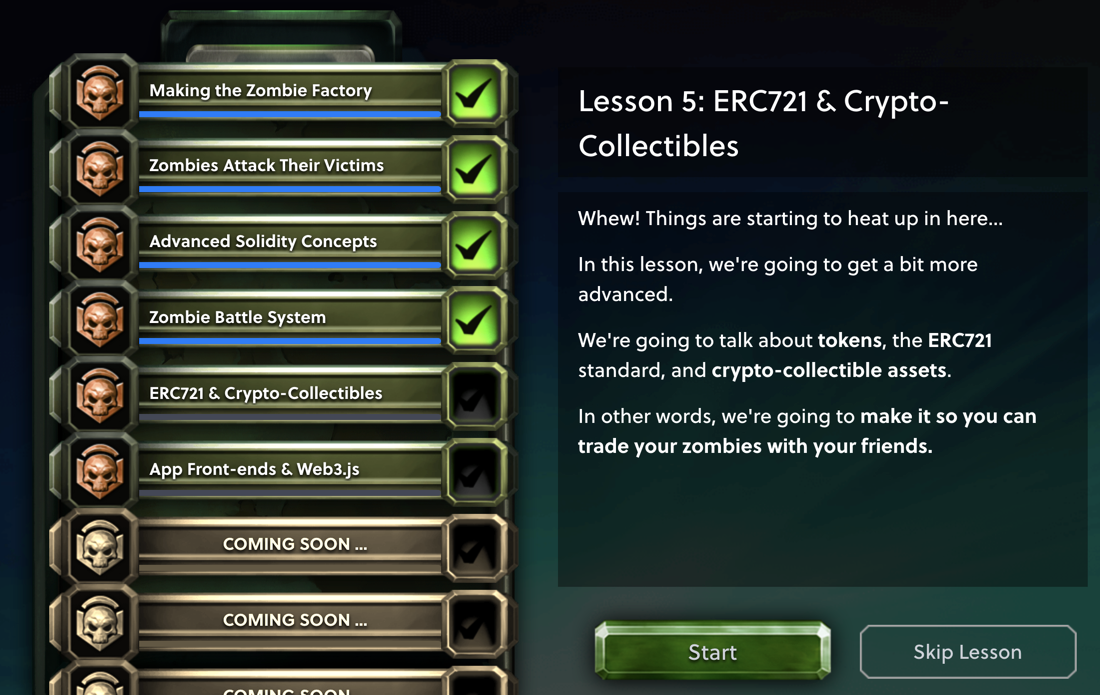 The original CryptoZombies course has been revamped with a new coat of paint — as well as some code updates in the lessons to make sure it’s using the most up-to-date Solidity best practices.

One on building Custom Game Modes for Zombie Battleground, and another on Plasma Cash (first lesson coming very soon).

The Custom Game Modes track has launched with 2 lessons to start with — and we will be releasing new lessons for both tracks gradually over the coming weeks.

Of course, Zombie Battleground being on the blockchain means you can have the benefit of true ownership of provably scarce collectible cards — where you’re free to trade, buy, and sell them with other players on our massive PvP marketplace.

But that’s only the tip of the “benefits of blockchain games” iceberg.

We’re proud to announce that we’ve refactored the Zombie Battleground code in order to make it fully moddable to the core.

What does that mean, exactly?

We’ve gutted the core game logic and put it into a Solidity file — which means the set of rules that govern the gameplay during matches and tournaments has become a swappable, modular component.

Not only that, but we’re also opening it up to allow any user to deploy their own version of the game engine logic to the blockchain, which will then become available as a Custom Game Mode to all players on the mobile client.

This means players of Zombie Battleground are not limited only to playing the default game mode. They will be able to use the cards they own to play hundreds, potentially thousands of different game variations that have been created by other users.

Any player can code their own custom gameplay rules and deploy them to Zombie Battleground’s GameChain as a custom game mode — where thousands of players can then INSTANTLY access it and start playing it in PvP matches.

This is HUGE news — because this is something that can ONLY be done on the blockchain.

We truly believe this will be one of the first “killer use cases” of blockchain applications — and it has never been possible until now.

All the tech we’ve been building at Loom Network over the past year has led up to making this possible. So we’re super excited to unleash it on the world.

Throughout gaming history, mods and modding communities have played a hugely important role.

Some of the largest games in history originally started as mods of other games — such as Counter-Strike and League of Legends.

And the blockchain is about to bring us moddability on steroids.

For the first time in history, the blockchain allows developers to actually mod server-side logic without needing to host their own independent game server and get users to download their game mod through third-party channels outside the game.

Mods that are deployed to GameChain will be immediately accessible from within the mobile game client to thousands of users, where they can be browsed and ranked by popularity.

Instead of a top-down architecture where the game developers create and the users consume, the blockchain allows for infinitely expandable game universes where all users can be involved in building out the game world and adding new features.

And just like Counter-Strike was spawned from Half Life, one of these custom game modes may end up becoming more popular than the official game mode itself.

We truly believe this is one of the first true killer features of the blockchain to be realized, and this is the technology that’s going to enable infinite game universes like “Ready Player One.” 😮 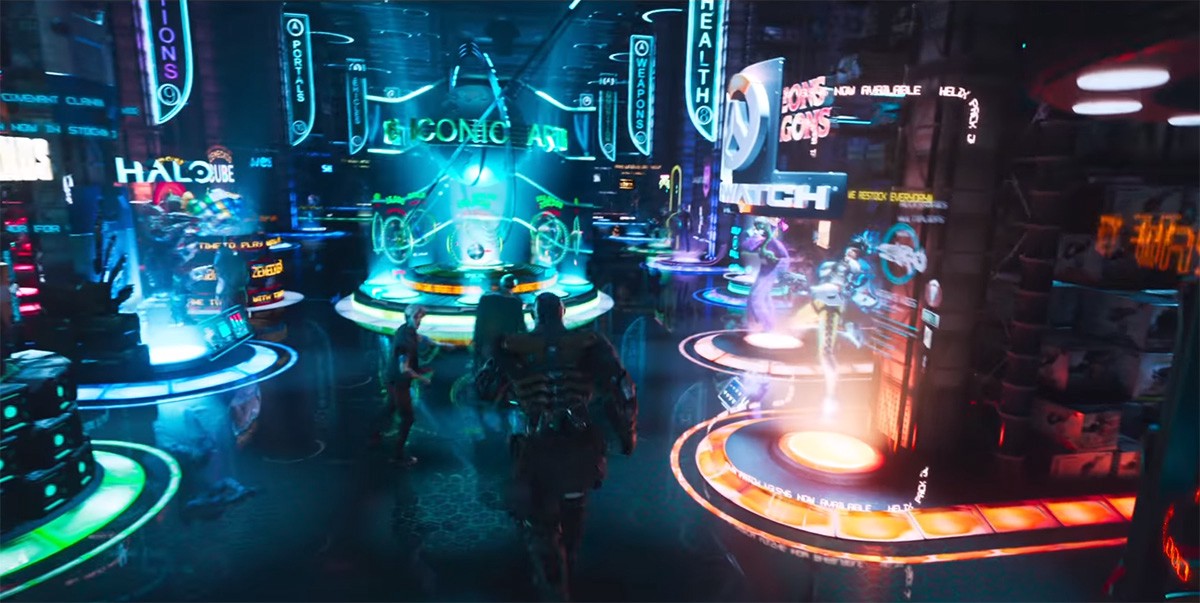 The blockchain enables expandable game worlds where any user can be involved in the development and creation process — something that has never been possible before now.

But It Gets Even Better: ANYONE Can Learn to Build One of These Custom Game Modes Through CryptoZombies

Game modding usually involves complex tools and programming, and has been traditionally reserved for only the most hardcore hackers.

But we’ve launched a CryptoZombies track that teaches you exactly how to build one of these mods for Zombie Battleground — step by step.

You can have your first Custom Game Mode built in less than an hour.

And you don’t even need to be an experienced coder, since CryptoZombies Course 1 is there to teach you how to program from the absolute basics — around 10% of our users have never touched a programming language before learning Solidity through CryptoZombies.

We’ve now had well over 300,000 students use CryptoZombies to learn blockchain game programming — and now we’re going to give them the tools to learn to become professional modders of a mobile card game.

How cool is that?

Zombie Battleground (together with CryptoZombies) is going to open the floodgates of a new era of game modding — and we’ll likely see many blockchain games follow suit in the next year.

We believe this is going to have huge implications on the gaming world, and we’ll be writing about why in more depth over the coming weeks.

If you’re as pumped reading this as I am as I’m writing this, and you can’t wait any longer to get started…

Follow this link to dive into the CryptoZombies Custom Game Module path.

You’ll be able to get in on the ground floor and be one of the first ones to learn to build these types of blockchain game mods.

Within the coming weeks, we’ll be launching a Custom Game Mode Creator Tool for Zombie Battleground — which will let you upload the code for your custom game mode and deploy it to GameChain without leaving your web browser.

After that, thousands of Zombie Battleground players will be able to access your game, and you’ll be able to get immediate feedback from our community!

But beyond just game mods, we’ll also be introducing…

The Plasma Path: Learn How to Use Plasma Cash

Plasma has become one of the biggest buzzwords in the blockchain space.

But it also seems to be one of the most misunderstood concepts.

So we knew something had to be done.

And just like how the original CryptoZombies course took something most people perceived to be difficult — Ethereum development — and broke it down in a way anyone can understand, we figured we owe it to the community to do the same thing for Plasma.

At the time of this release, these lessons are marked “Coming Soon.”

We’ll have lessons on:

But we couldn’t delay our excitement for the Custom Game Modes any longer, and decided to move forward with the re-launch ASAP 😉

What are you waiting for? Dive in and get started with the new lessons.

And if you haven’t yet, click “Sign In” on CryptoZombies and make an account. That way you’ll be able to get notified every time we release a new lesson.

I’ll see you on the other side — and I’m looking forward to battling you in PvP on your custom game mode!